How to Trap Fish

from Preparedness Advice Blog by admin

In surf, shallow areas, and small streams it is possible to trap fish.  Before you decide to set up a fish trap, understand that it requires effort.  Are the calories you expend making the trap worth the calories you gain from the fish?  If you are going to be in an area several days, a fish trap is probably a good idea.  Remember that a fish trap will be visible to others.  Fish traps are currently against the law and should only be used in a life or death situation.
A fish trap consists of a series of sticks or rocks laid in a pattern that traps the fish.  You build a corral with a funnel leading into it.  When you have fish trapped, block the entrance and either club the fish, or catch them with your hands.  If you get a large amount of fish in the trap, you can leave them caged up until you are ready to eat them. This is a good way of preserving the fish
Remember that in large streams and lakes, fish migrate into the shallows along the banks in the early morning and evening to feed.
The trap can be build to block a small stream completely.  The tidal fish trap is the best choice for these conditions.  Wade in upstream and herd the fish downstream into the trap.
In the ocean schools of fish approach the shore at high tide and travel along the shore.  Set your traps when the tide is out.  The v-type trap works well under these conditions.  Set your trap so that the wide opening of the v faces shore.  It will trap fish as the tide goes out.
Use natural rock pools, sand banks or other natural features whenever possible.  There are all kinds of things you can use to make a fish trap.  Netting made from old clothes or sacking will work.  The water needs to be able to flow through the material and the holes need to be small enough to trap the fish.
It has been a long time since I have had a chance to make a fish trap.  I wanted to make one and photograph it for this article, but unfortunately it is against the law around here and I don’t need that kind of trouble.  See the following diagram for an example of a fish trap.
Howard 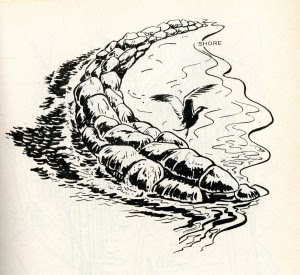 A simple trap made out of rock for use along the ocean. Build it while the tide is out. The fish will come in when the tide is in and get trapped as the tide goes out. 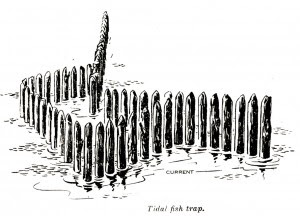 Simple tidal trap made from sticks. When build in a stream, the v should face upstream. The fish swim in have trouble finding their way out. To keep fish alive in it merely block the entrance.
Posted by Bax on 8/31/2012 10:46:00 AM
Email ThisBlogThis!Share to TwitterShare to FacebookShare to Pinterest
Labels: Fishing