Matches in your Emergency kit

from SURVIVING IN ARGENTINA by FerFAL
Today while reading some threads on a Bushcraft forum I came by a thread titled “Why Even Carry Matches?”.
In these type of forums you’ll often find lots of good info, but you quickly notice that sometimes nostalgia outweights practicality. This is something the person interested in practical survival cannot afford. Its understandable that there’s a certain allure in carrying a “tinder box”, a small leather bag made of bull’s scrotum with dried mushrooms and hitting flint and steel to start fire. Now, do these vintage fire starting tools have a place in your survival kit? Maybe in your home or car kit, or smaller every day carry emergency kit? Not really. You have better fire starting options than charcloth, and while firedrills work, during a real emergency you don’t care about looking like Bear Grylls, you just want a fire started as quick as possible. Yes, ferrocerium rods works (Swedish Firesteel

), but a match or lighter is faster.
Emergencies are by definition inconvenient, unplanned, and potentially life threatening. You don’t have controlled, ideal conditions. You may be wet, cold, under shock, crying, bleeding, wounded. You may have dead or wounded loved ones around you, and you may be running out of time. Its just not the moment to play Man vs Wild.
Lighters, specially storm lighters that reach extremely high temperatures, are very effective but they are also more prone to breaking, running out of fuel, or not working when wet. Because of this you don’t want them to be your only option during an emergency.
Lighters and ferrocerium rods should be carried as well for redundancy, but don’t forget about matches for a real emergency kit!
While writing all this I can’t help but to remember the Pomar family. The Pomars weren’t lost in a deserted Island, they didn’t go trekking along Antartica, or venture into the Amazon rain forest. They simply had bad luck when visiting one of their relatives nearby.
After being missing for over two weeks and one of the largest manhunts I remember in this county, the Pomar family, husband, wife and two daughters were found dead not 20 miles away from their house, 20 yards away from the highway. While traveling to visit a relative in the next town, they had a car accident with bad enough luck that the car went flying off the road and crashed into a small grove of trees. Plantations and plains all around them as far as the eye can see, but they had bad enough luck to be thrown in there so the vehicles and choppers looking for them never saw them in the bush. It was later found that the wife survived the crash. Wounded and probably expecting help to arrive soon, she dragged herself next to her husband’s corpse, and survived there three days before dieing due to the wounds and exposure to the elements.
If you are wounded, barely able to move, and starting a quick fire could probably save your life like in this case, both for signaling and heat, a plastic case full of matches is your safest, easiest and quickest way to start a fire. 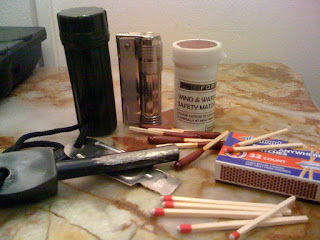 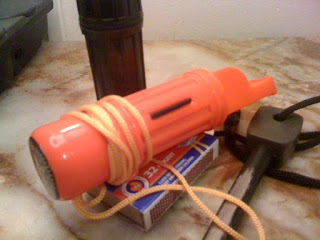 The case pictured is bombproof, has a rubber seal to keep it watertight and even includes a mirror and small piece of ferrocerium in the bottom.
The plastic case where the NATO stormproof matches come in isn’t nearly as study. The old film plastic cases pop open too easily. I tried the Marble’s metal match box but the plastic ones are better. The green one I own looks nice (Bushcrafty :-)  ), but the orange ones are better because they are more visible if dropped in the ground. This one also includes a whistle and compass. The piece of ferrocerium is almost useless but at
least its there.

In my match boxes I keep several stormproof maches and a few large, strike anywhere matches. I also keep a striking strip (cut out of an ordinary box of matches) and a piece of cotton to keep everything from moving and making noise. This could also be used in an emergency along with the little piece of ferrocerium.
Yes folks, matches do have a place even in the most basic kit. They don’t look nearly as cool as firesteel on camera but when needing to start a fire after falling in icy water, barely able to control your fingers, practicality beats cool by a long shot.
Take care,
FerFAL

Posted by Bax on 2/06/2011 08:00:00 AM
Email ThisBlogThis!Share to TwitterShare to FacebookShare to Pinterest
Labels: Fire Starters