from Catman's Litterbox by Catman
The prospect of civil unrest on the scale we are currently watching unfold in Egypt and other Middle Eastern countries should give one pause.

The violence was initially directed against government installations and businesses such as banks which were closely allied with the government of Hosni Mubarak. It appears the police have disappeared from the streets and some individuals have taken advantage of the chaos and begun to loot. Some incidents apparently have taken the form of what we here in the United States would call "home invasions". Neighborhood watches have been hastily set up by groups of residents to protect themselves.

Some of the looters were apparently government agents provocateur according to reports.

Here in this country, we're not strangers to civil unrest. Usually they have occurred in urban areas and have been contained. However, as society continues to decline, and crime continues to escalate, efforts must be made to harden your home against external threats of the bipedal persuasion.

If you have a garage and it is full of junk, and your vehicles are left in the driveway or street, this is your first priority. You need to store your vehicles out of the sight of would be criminals.

There are valuable assets within your car that are tempting targets for thieves. This is sure to become more of an issue as the economy continues its downward trend. Gasoline is projected to head to $5.00 per gallon or higher. Given that many gasoline tanks in vehicles are now plastic, a cordless drill and a bucket are the only tool needed to empty your tank and stick you with an expensive repair bill. The actuators for airbags are another target, as are catalytic converters which are sold to scrap metal dealers for their platinum content. There are anecdotal stories of aluminum wheels becoming the target of metal thieves as well. These are stock aluminum wheels common to vehicles today, not the custom ones.

There's also the issue of what happens during riots. Cars are vandalized and set ablaze. If your vehicle is next to your home and some hoodlum sets it on fire, the car will burn at approximately 1500 degrees F. That is enough to set adjacent items on fire just due to proximity. There's also the issue of the tremendous amounts of toxic gasses emitted by a burning vehicle that could potentially flood your home.

Next are your exterior doors. They should be, at minimum, solid core wood doors with reinforced frames and reinforced door strikes. Head on over to DoItYouself.com for a tutorial and parts list on reinforcing your own doors and door frames.

If you have the ability to upgrade your doors and door frames, the next step up would be steel doors and frames. Steel doors with steel frames are much better at resisting battering or attempts to kick in the door and can be ordered as bullet resistant.

You need to purchase quality locks and hardware for your doors. They need to be able to withstand the abuse dished out by a determined attacker. Buy the best you can afford, keeping in mind that you want a deadbolt lock with at least a one inch bolt throw. Check out The Ultimate Lock. Hinges are another consideration, buy the best you can afford and use at least three inch screws to mate the hardware to the door jamb and to the structural frame.

If you're not sure what we're talking about here, take a look at the image below. 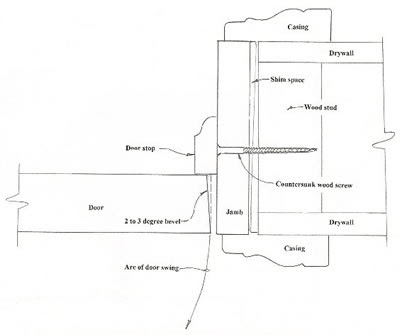 courtesy of Homestead Interior Doors
You're looking down on to the top of the door, door jamb, and structural frame. The frame is labeled here as "wood stud". See the screw that goes through the jamb and into the stud? The larger the diameter of the screw, the longer the screw, and the greater the number of those screws will increase the strength of your doors. This is also why you want a deadbolt with at least a one inch throw. Short bolts often will not reach the stud and thus are much weaker as the jamb material is much thinner.

If you can't afford to do these things, or are in a situation where you are unable to make changes to your doors such as a rental, you can always resort to using cross bars or door bars. You can make these yourself using 2x4 lumber. 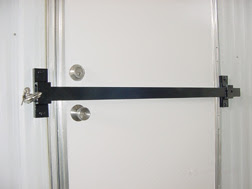 If you use three of these, one in the middle, one at the top and one at the bottom, it will be incredibly difficult for someone to batter the door down. These can be kept in a closet or under a bed until the time of need. They are quick to install using lag screws and simple hand tools such as a socket wrench and a hand drill to start your pilot holes for the screws.

Also consider installing steel security doors over the man door at the garage and side entrances to your home.

Sliding glass doors present an entirely different challenge. Forget about people trying to pry open your door in a civil unrest situation. They'll probably just throw a rock through it. The same is true of glass windows.

You can use sheets with a privacy feature as seen in the video, which would make it more difficult for an attacker to see you inside, or clear. Polycarbonate plastics can be bought many places such as TAP Plastics and even Amazon.com. Remember kids, the bonus is that polycarbonate plastics can be bullet resistant. Just remember to give yourself a gun port for returning fire.

When you attach polycarbonate panels to the exterior of your glass doors and windows, be sure to use fasteners that are not easily removed.

Do NOT seal yourself in the dwelling! Plan to have multiple paths of exit! If you have a home that is built on a foundation and not a concrete slab, make sure the crawl space is accessible and that you have a way out past the foundation in case all exterior exits are blocked.

I know one individual who has gone as far as installing a network of tunnels between his home and outbuildings to ensure he and his family have multiple paths of escape.

Always have a supply of fire extinguishers, buckets of water, sand or common dirt on hand to deal with fires.

Also be aware that in some places it is illegal to fortify your home. Check your local laws first.

Posted by Bax on 2/11/2011 11:40:00 AM
Email ThisBlogThis!Share to TwitterShare to FacebookShare to Pinterest
Labels: Security