from Surviving The Times by dlsoucy
One of the drawbacks a preparedness plan can encounter is the necessity for bugging out against your wishes. You may have to leave your survival homestead and head for the hills with little more than your bug out bag to support you. You’ll need shelter beyond a lightweight nylon tent if you plan on staying anyplace for more than a couple of weeks, but what kind of shelter do you build? The obvious answer in a woodland situation is a log or bark shanty. The log shanty can be enclosed on four sides if needed and used year round as a permanent camp. And these shanty type huts really aren’t hard to build for a couple of people, or even just one if need be.
I pulled this piece from W.H. Gibson’s Camp Life in the Woods, first printed in 1881. It’s too bad that so many people have lost the simple ways and tend to make big projects out of simple ones, wasting time and energy that could be better spent in more productive pursuits. Camps like this were commonly erected throughout the vast stretches of woods that once graced our countryside. A couple of days work would build a luxurious woodland home, and shanties like this could be built in just a day by those who knew how to hone their skills and tools. Keep these instructions in your preparedness binder, you just may find them useful someday.
THE TRAPPER’S SHELTER.
The life of the professional trapper is a life of hardship and severe exposure, and a man not only requires considerable courage, but also great bodily vigor, in order to combat successfully the dangers of such a wild, adventuresome existence.
The cold and the storm not only imperil his life, but he is often exposed to the attacks of wild beasts. A shelter, therefore, in one form or another, becomes a necessity while it is always a decided comfort, in comparison to a campaign without it.
The reader will find below descriptions of the various shelters alluded to in other parts of this work, and used by trappers throughout the land.
The most substantial of these is the log shanty, commonly known among trappers as the “home shanty,” on account of its being constructed as the only permanent shelter on the trapping line.
It is used as a “home,” a place of rendezvous, and a storehouse for provisions, furs, and other necessities and valuables. Other temporary shelters, known as bark shanties, are also constructed along the trapping lines at intervals of five or ten miles, as resting places. These we describe under the proper title.
Although, to the amateur trapper, the log shanty is not likely to become a necessity, we will nevertheless describe its mode of construction, in order to satisfy our more earnest and adventurous readers, who aspire to a full taste of wild life.
Our illustration gives a very clear idea of such a shanty.
It may be constructed of any size, but one of about twelve by ten feet will be found large enough for ordinary purposes. Select straight logs, about eight inches in diameter. The whole number required will be thirty-six. Of these one-half should be twelve feet in length and the other ten. These should now be built up in the square form, on a level piece of ground, laying the ends of the logs over each other, and securing them by notches at the corners, so deep as to allow the edges of the logs to meet.
Lay two short logs first, and continue building until all the thirty-six logs are used, and we will now have four symmetrical sides about six feet in height. The place for the door should now be selected. The uppermost log should form its upper outline, and the two sides should be cleanly and straightly cut with a crosscut saw. The window openings, one or more, may next be cut, commencing beneath the second log from the top, and taking in three beneath it. Replace the logs above, and on the ends of those thus cut, both in windows and doors, proceed to spike a heavy plank, driving two nails into each log, about five inches apart, one above the other. This will hold them firmly in place, and offer a close-fitting jam for the door, and neat receptacle for the window sashes, which latter may now be put in after the ordinary manner. 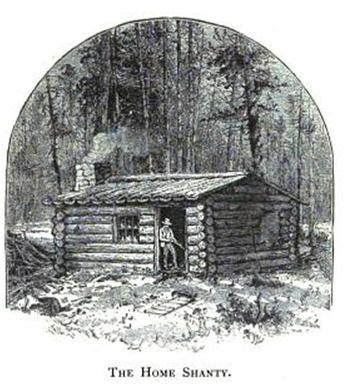 The gable ends should next be built upon the smaller sides of the hut. Commence by laying a long log (notched as before) across the top of the frame work, and about two feet inside the edge. This should of course be done on both sides of the hut, after which they should be overlapped at the corners with logs eight feet in length. Next lay two more long logs, parallel with the first two, and about a foot inside them, notching as before. The ends of these should be spanned with beams eight feet in length.
Two more long logs are next in order—let them be one foot inside the last two. Overlap these with beams five feet and a half in length, and in the exact centre of these last pieces chop notches for a heavy log for a ridge pole. The gable outline, direct from the ridge pole to the eaves, should now be cut off by the aid of a sharp axe. This may be done either while the pieces are in position, or the line may be marked with a piece of chalk, and the logs taken down in order to accomplish it.
The roof is now required. This should consist either of strips of bark or the rounded sides of logs split off and hollowed into troughs. The latter method is preferable, on account of its greater strength and durability, but the bark will answer the purpose very well, and is much more easily obtained. The manner of adjusting the roof pieces is clearly shown in our illustration. The first row is laid on with the hollow side up securing them at top and bottom by nails driven through each into the ridge pole and eaves-log, care being taken that one of these pieces projects well over the gable, on both ends of the hut.
These pieces are now overlapped by the second row, and with the addition of the large piece which covers them all at the ridge pole, the roof is complete, and will stand a heavy rain with little or no leaking. The crevices should now be stopped with moss, dried grass or clay, after which the log cabin is complete. When the bark roof is made, additional poles may be inserted beneath as props. They should be three or four inches in diameter, and run parallel with the ridge pole, at intervals on the slope, notches being cut to secure them.
Our engraving represents a chimney, which may be constructed if desired, but the necessity of this may be done away with by using a small camp stove, and making a small opening in the gable end of the hut for the passage of the pipe. If a stove should not be at hand, and our amateur should decide to “rough it” to the full extent, he may build his fire-place and chimney as follows: It will be necessary to cut away an opening in the logs at the gable end, as was done for the door and windows. This should be about three feet square, and the fire place should be built of stone and clay, or cement, to fill the opening, and project inside the hut.
The chimney may then be built up outside in the same manner, sufficiently high to overtop the gables.
Inside the hut overhead will be found abundant room for the hanging of the skins, and any number of cross-poles may be rested across the beams. There are facilities for the swinging of a hammock, if desired, and, in fact, a hut constructed like the foregoing is a perfect one in its way. There are other methods of building a log cabin, but we will content ourselves with what we consider the best way of all, and pass on to the-
BARK SHANTY. 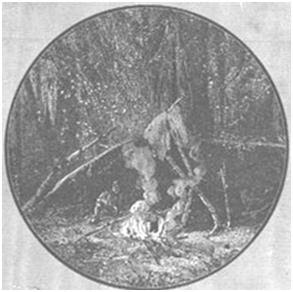 This is made by first driving into the ground two forked poles seven or eight feet in height and stout enough to sustain a ridge pole of moderate size. Against this ridge pole other poles should be rested at intervals of two feet, and sloping to the angle of forty-five degrees. The frame-work thus formed should now be covered with bark, commencing at the ground and allowing the edge of each piece to overlap the one beneath after the manner of shingles, in order to shed the rain in case of storm. Spruce or birch bark are excellent for this purpose and the pieces may be secured with nails, and kept flat by the weight of another series of poles rested against them. The sides of the shelter should be treated similarly, the front being usually left open to face the fire, which the trapper generally builds a few feet distant. In constructing a bark shanty, it is well to select some spot protected from the wind, close to the foot of a mountain or in the midst of trees, always letting the open side face the direction most sheltered.
If desired, the front can be enclosed after the manner of the sides and top, but this is not required where the fire is used.
This style of shelter is represented here, and certainly looks very comfortable.

Posted by Bax on 2/17/2011 10:59:00 AM
Email ThisBlogThis!Share to TwitterShare to FacebookShare to Pinterest
Labels: Retreats/Shelters