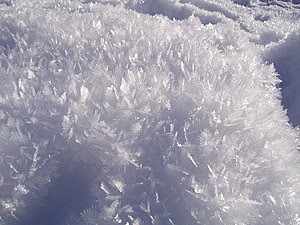 When a person joins a survival mailing list, many
things are popular to dsscuss.  Having been on many
survvial mailing lists, I have come to recognize some
of the popular subjects. Bugging out is one of the big

grab a bag of supplies and a rifle, and head for the
woods. Doesn't matter what the problem is, some

one will want to bug out. Guns are another subject.

Fortunately, or maybe unfortuantely. Many problems
we face are  far more simple than TEOTWAWKI. You
know. The End of The World As We Know It.  So far,
the world hasn't ended, at least not as I know it. We
have had plenty of problems including depressions,
recessions, and volcanos. These, and power cuts and
military insurgenes, wars, and religious conquests.

But, who considers snow, on the list of threats we
face? It isn't compelling, like parachiging Cubans
coming down from the sky in the Red Dawn movie.
Nor is it a popular subject like looting, or Mutant
Zombie Bikers.

But, in the years I've been alive, snow actually has
come closer to killing me than Cubans, or Mutant
Zombie bikers. So, I'm one to consider snow a serious
concern


There was recently (January 2011) a heavy snow

fall in New York City, USA. The snow fall resulted
in at least two deaths, and untold misery for the
residents there. The poorly plowed streets had plenty
of vehicles stuck in the snow, and many people could
not get out of their own homes and apartments for
many days.


The electric stayed on. The televisions brought news

coverage up to the minute, of who was snowed in.
Thousands got to stay home, and watch Geraldo, and
The Price Is Right, at 11 AM. But, there was much
suffering, also. The police could barely move. Their
vehicles have ground clearance, like everyone else.
The ambulance guys in some cases could not get to the
sick people. The efforts were extreme. Crews of people
pulled stretchers over the snow. But, that can't rescue
everyone.

If you live in an area which gets snow, you would be
wise to make some simple and easy preparations before
the snow season gets bad. Figure out what your basic
needs are, and work to take care of them before things
get too bad.


The simple problems are the most common ones. The
simple safety steps are the most important ones. First,
if you can stay home, please do so. When it is snowing,
you are much safer at home. As compared to walking,
or being in your car.

Second, have a plan. Be creative. Figure out what your
needs are, and alternate ways to meet the needs.

Third, have some basic supplies. An emergency kit.

Rather educated fellow. Going home from a trip, and

So, what could James have done better? What can
you do better?

First, he could have respected the power of snow.
Talk with the local folks. He could have gotten a
motel room, and stayed indoors during the storm.
In the case of severe snow, don't go out.

Second, the plan. If you do go out, tell trusted other
people. Let them know your expected route, and
arrival time. If his family had known, they would have
found him a lot sooner. Yes, his family did search for

him. Even to the point of hiring a helocopter.

Third, he could have had an emergency kit in the car.
Even going on a side road as he did, he may well have
lived to tell. That is, he had some emergency supplies
in the car.

Lets look at some things that you can do at home.

Take care of your medical health. If you are shovel-
ling, do it slowly and pause often to stand, and rest.

You will actually get done sooner, if you pause and
rest after each shovel of snow, or maybe every other
one. Drink plenty of water, you'll dry out faster than

you think. What will you do if you have a medical
problem at home? Do you have a good supply of your
own medications? A first aid kit

Second, consider the indoor heat. What to do if the
power goes out? Do you have backup heat of some
kind, for a couple days? A fuel based cook stove or
portable heater

is good. A generator can wire into
your furnace, for an hour morning and night. You'll
want battery power fans to blow the heat from room

to room. Or get the heat off the ceiling. Do you have
a fire extinguisher

Posted by Bax on 1/24/2011 10:12:00 AM
Email ThisBlogThis!Share to TwitterShare to FacebookShare to Pinterest
Labels: Weather