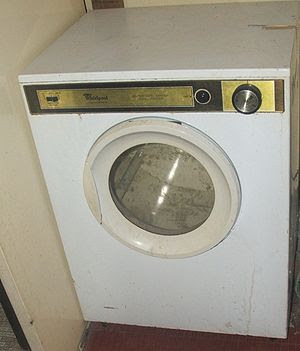 from Montana Preppers Network by gman
Just about everyone has dryer lint. I suppose most people just toss it out in the trash. But I don't. I've been saving dryer lint for what seems like ages. I happen to know that there are lots of other folks out there that do the same thing. How do I know this? Because not only have I had LOTS of people actually admit that they save lint, I have seen it with my own eyes.

Walk into most laundry rooms and you will probably see a pile of lint somewhere. On top of the dryer, in a separate trash bag, in an old coffee can and some even have a "special container" just for lint saving. I'm one of those. I have an old trick or treat bucket stuffed to the rim with dryer lint. Somewhere I even have ANOTHER container to dump the bucket into when it gets full.

I was thinking about it one day (yeah I do tend to think of off the wall stuff sometimes) and asked myself just what in the world I was going to do with all that fluffy, multi-colored recyclable material. I don't know why I even started saving it to start with. I just kept thinking " There must be something I can do with this stuff". I also decided to ask around and see what others had to say about the stuff. The number one answer, hands down, was to use it for firestarter.

I started searching around and came up with a few other things that dryer lint can be used for. I'm kind of glad I did too. Somehow it makes me feel better to know that I'm not alone in my "harvesting" of lint!

Here is where I have to put in a serious warning. Dryer Lint is EXTREMELY flammable. Which is, I suppose, one reason that the #1 use for it is for starting fires!

You have to be careful when you burn dryer lint as well. Remember that how it burns depends on what the lint was made out of. Things that are man-made will melt and/or smoke. It might smell like burnt plastic or even put out fumes. Cotton, wool and linen dryer lint will work just fine. If you aren't sure about what's in it you might want to take it outside in an open area and burn some. If it morphs into something ( like little beads etc) don't put it in your fireplace or bbq pit.

Some of the things people use it for call for caution and a bit of common sense. If you decide to use any of these ideas please use your head and remember just how flammable this stuff is ok?

Alrighty then.... We have the warnings out of the way. Now on to some of the interesting things you can use all that harvested dryer lint for......

Here are a couple of ways to use that fluffy stuff as a firestarter. I like a couple of these ideas because not only does it call for using your dryer lint but also some of the other things just laying around the house "just in case".

Try using it instead of lighter fluid the next time you fire up your BBQ pit. Lay little pieces around your briquettes to start your coals.

Lint also makes a good woodstove or fireplace tender. Just ball up some of the soft lint and place it in your starter kindling. They should ignite quickly and get your fire started easily.

Take an empty toilet paper or paper towel roll and stuff it with old newspaper and dryer lint. Close up the ends and you have a great firestarter. Use it in your fireplace or put a couple in your stash for your next camping or hiking trip.

This idea seems to be one of the most popular in the searches I've done. Take a cardboard egg carton and stuff lint into it. Then, using old candles, paraffin, or even used crayons, Pour melted wax over each cup on top of the lint. Use one or two of your "lint eggs" to start your fire.

Make firestarter "kisses". Take a small piece of wax paper and wrap lint and little wax bits in it. Then twist the wax paper ends like a candy wrapper. Put them in your stack of wood and light the end of the waxed paper. This would be a good way to use up some of those little bits of crayon pieces that the kids have laying around too.

Something else I ran across while reading about lint is to use it when making small dolls and teddybears as well as the batting for quilts. Stuff your home-made cushions with it. I saw where someone used it in their old farmhouse for insulation against drafts. Personally I'm not sure I would want to do this though because of the possibility of it catching on fire. I only mention it because it actually would work.

You could leave some out in the yard somewhere for birds to make their nests from as well as using it in your worm beds. Again, I would do a bit more research before trying one of these ideas.

How about using it to make a draft stopper? It would work well on a tile floor, especially if you have a metal door or one of those metal kickstopper on the bottom of your door. You could use a tube sock and stuff it with dryer lint and then sew the end closed to keep the drafts from blowing in under the door.

You know that nesting box material you pay an arm and a leg for at PetSmart for your hamsters and guinea pigs? Try using dryer lint instead. Warm, clean, cuddly and cheap!


How about using it for packing material? It can't be any worse than using those dang peanuts that get everywhere when you open up a package.

Use your artistic abilities and make a masterpiece from old dryer lint. Use it for kid's craft projects. You can shape the lint into almost anything or even use it to replace cotton for things like snowmen or clouds. Just glue the "shapes" onto construction paper. How about using it for things like hair or even fur for your craft projects! You can make some dryer lint clay from it or even make paper out of it. There are several places to get recipes for either of these projects on the internet.

You could make candle wicks from it, as well as rope. Just roll it the same way that the Indians used to make rope from plant fibers. It would take a bit of time but it would work!

You could use it to help with growing your plants. You don't want to put the lint on the soil next to the plant. It could mold. But you could use it in the bottom of your pots. It will keep the soil IN the pot and let the water OUT. If you are going to do this though you might want to be careful with what kind of lint you use. Some fabrics and some laundry detergents have chemicals that you might not want on your plants. But if you use the dryer lint from natural fabrics like cotton and linen and eco- friendly detergents it should work just fine!

Here's another use. Use dryer lint to soak up used motor oil. Before you change the oil in your car, put down a "sheet" of lint under the car and on the sides of the front of the car. If you spill oil, cover it with another layer of lint and firmly step on it so it soaks it up well. Be sure to discard the lint carefully.

So there you have it! Some actual uses for that stuff that seems to magically "grow" without much help.
Arthur:SciFiChick

Posted by Bax on 12/18/2010 12:31:00 PM
Email ThisBlogThis!Share to TwitterShare to FacebookShare to Pinterest
Labels: General