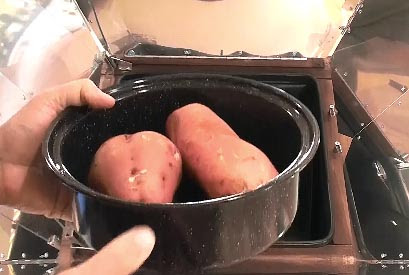 I enjoy experimenting with all things related to harnessing energy from the sun. Living in a part of California where the sun shines all summer long, I use solar energy to produce electricity, heat water, and sometimes to cook with. Learning to harness the sun’s photons (particles of energy) will not only save you money, but it brings you closer to self-sufficiency.
During the past several years I have built (and purchased) several solar cookers. The solar cooker that I purchased is named “Sun Oven”, and has been a reliable and HOT cooker during the 2 years I’ve had it. My home made solar cooker does not get as hot, but high temperature doesn’t really matter when it comes to cooking most foods.
I believe that a lot of people have it in their head that food has to be cooked at 350 degrees F, because it is the most often referenced temperature in recipe books. Most people would never dream to go below 325, for fear of under cooking their food.
That fear is not warranted, because so long as the internal temperature of most foods is heated to 165 degrees F, then it becomes safe to eat. A solar cooker that maintains 225 degrees for a long enough time, will easily cook the food up to 165 degrees. Of course, the higher the temperature of the solar cooker, the faster your food will reach 165 degrees.
My home made cooker has a hard time getting hot enough during the winter (although I have plans to build a new one that will be better!), whereas the “Sun Oven” does much, much better because it is more efficient at capturing and keeping the solar energy.

Hot Tip
————————–
For those of you starting out with solar cooker cooking, I want to tell you one of the secrets to getting even more deliciousness out of many meals, especially baked potatoes. OK, here it is… add some water to the pan, and keep it covered. Simple! Of course, spice it up to your delight.
————————–

Since solar cookers generally cook sslowerrr than a conventional oven (except for the solar cookers that truly hit 350 degrees or better on a good day), a long slow cook at say, 275, combined with a bit of moisture for the food to draw in, will turn out scrumptious.
The food won’t burn (it generally doesn’t get hot enough to burn) and won’t overcook (exception being solar cookers that truly reach conventional oven temperatures). Even with these super efficient solar cookers though, since the optimal position of the sun moves throughout the day, a solar cooker facing in one optimal direction will become cooler as the sun moves further from that facing direction.
Most solar cookers will require that you move them several times throughout the day in order to stay facing the sun and to stay hot enough. During the summer months, when the sun is high in the sky, moving the solar cooker repeatedly to face the sun is generally not required, so long as it is facing the general direction. During the Spring, Fall, and Winter, you will probably need to keep up with it.
One problem during months when the sun is low in the sky, is more obstacles will get in the way and shade an area. So, unless you have a fairly wide open space, surrounding trees will become an issue. Being up on a hill helps too.
You can see the Sun Oven – Solar Cooker

Here is a short video showing the Sun Oven, tips about the right size pan, and the secret ingredient added to a couple of sweet potatoes to be added with dinner tonight.
Click here to view the embedded video.


If you enjoyed this post, or topics of emergency – disaster preparedness, consider subscribing to our survival blog RSS feed or Email notification of new posts on the Modern Survival Blog

Posted by Bax on 12/04/2010 11:42:00 AM
Email ThisBlogThis!Share to TwitterShare to FacebookShare to Pinterest
Labels: Cooking