from Adventures in Self Reliance by Angela
Dehydrating celery is pretty simple and almost doesn't deserve its own post except that the results are pretty darn amazing, so I'm posting it anyway.  Unfortunately, when I dried this last batch I was in a bit of a hurry and didn't even take the time to take pictures until the end, so really all you get to see is the results.

Celery doesn't need to be blanched or anything, just washed, cut up, and put on the trays.  I used the same V-slicer I used for the carrots so the slices wouldn't be too thin.  I ran a bunch of stalks through at the same time.  Okay, I cheated and didn't even take the stalks off the plant before I started slicing.  That way the whole celery plant was sliced up in a matter of about 30 seconds which was about how much time I had to spend on this project.  Then I put the slices on the dehydrator trays and dried them at 125 until they were crispy.  Overnight worked great although it may not even take that long.  The good thing about drying something until it's crispy is that it's tough to over dry it.  When the celery was all dried, the whole plant of celery fit in half of a pint jar.  Seriously amazing. 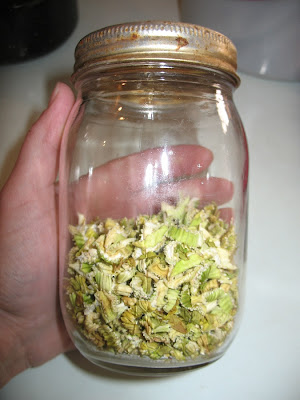 Dehydrated celery is perfect for soups and casseroles.  It doesn't re-hydrate well into celery you could make ants-on-a-log out of, but for cooked dishes it is perfect.  So don't let your celery go soggy in the bottom of your fridge--get it on the dehydrator and preserve it for another day's meal.

Posted by Bax on 12/20/2010 08:48:00 PM
Email ThisBlogThis!Share to TwitterShare to FacebookShare to Pinterest
Labels: Food Preservation