"And Elisha said unto him, Take bow and arrows..."

Elisha I'm not, but I’ve previously written and posted a couple of articles on primitive weapons. The first article concentrated on pretty basic stuff like throwing sticks and such, the second on a more advanced ones, like the sling. This third one is about bows, which are likely at the top of the heap in non-gunpowder weapons.

There are several good arguments for including some sort of bow in your planning. The first of which is that the bow is likely the most lethal of the non-firearm weapons. Using modern arrows tipped with razor-edged broad-heads traveling at a couple of hundred feet per second, you can count on penetration and killing damage if you hit the target properly.

The second reason to choose a bow is range. Generally, you can place an accurate shot out to 40 or 50 yards without an unreasonable amount of practice, and an expert bowman might take a shot on a large target like an elk out to 70 yards, but as accurate arrow placement is critical in dropping big game, shorter is usually better. Still, the bow outranges everything else except firearms.

Another reason to consider bows is the question of maintenance and ammunition re-supply. Generally, arrows can be recovered and reused without the need for additional equipment and supplies, unlike firearms. They are simple to maintain, and what parts you need are cheap and easily replaced by most people. This may not be strictly true in the case of some compound bows that require ‘tuning’. Still, the likelihood of you being able to maintain and repair your bow are far higher in my opinion than your chances of being able to maintain firearms and a supply of ammunition over the long term.

Of course, even the most careful archer will lose or break arrows and strings or even the bow itself. The advantage the archer has is that with again a not unreasonable amount of practice and skill, he can manufacture ammunition, parts, or the whole weapon! Other advantages of bows include the near silence of operation and the low carrying weight of the weapon and ammunition.

That said, taking a bow to a gun fight is usually bad news for the bowman. Despite their occasional use by special forces and guerillas, the likely defensive use for bows is limited to the occasional silent ambush. The more proper role for the bow in survival is as a supplement to firearms. As mentioned previously, ammunition will eventually run out if things are bad enough for long enough, and having a bow and some skill in its use will push the day when you fire your last bullet further into the future.

There are three broad classes of bows to choose from. The first of these is the compound bow (see picture above). Using a system of eccentric pulleys, the compound bow allows for a ‘let-off’ of a certain proportion of the bow’s draw weight, making it easier to wield a more powerful bow with less effort. They tend to shoot arrows in a flat, fast trajectory, and are a popular choice. 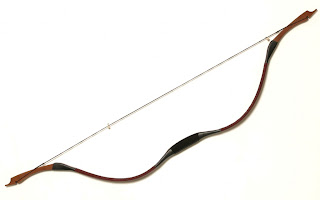 The second type of bow is the ‘simple’ bow, either re-curved or longbow style (A re-curve is pictured here). Simpler in construction, they require more skill to use, but generally are lighter than a compound bow and easier to maintain. Essentially having only two components (the stave and the bowstring), they are deceptively simple in structure. This type of bow is also the ‘easiest’ to manufacture from available materials.

If I was choosing between these two types my choice would be the traditional bow over the compound, but I’ve shot and enjoyed both. 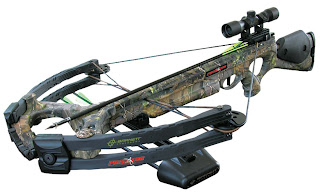 A third type of bow you might want to consider is the crossbow. The crossbow has two main advantages. The first is that the draw weight is far higher than with the other two bows, giving the bolts (not arrows!) a lot more kinetic energy upon release. The second is that it most often has a rifle style stock and trigger, and is sighted much like a rifle, so the transition from rifle to crossbow may be easier for some people. It also retains most of the simplicity of the traditional bow, and both crossbow and the ammunition for it can also be built from scratch.

The downside is that due to its high draw weight, the crossbow is more difficult to reset, which leads to a slower rate of fire. It also tends to weigh more than traditional bows, and that combined with the difficulty of cocking it may make the crossbow a less than ideal choice for people of smaller stature. Additionally, it can be somewwhat more complicated mechanically, although this depends on the maker.

Finally a word about the ammunition for bows, whether arrows or crossbow bolts. There are many different types available. There is of course the traditional razor edged broad-head, which will do fearful damage to any living thing hit solidly. Additionally, there are ‘blunts’ for hunting birds or other small game, as well as arrows designed for fishing, complete with attached fishing line. These tips are usually interchangeable, and make the bow a very useful and versatile weapon.

So there you have it. Bows don’t replace firearms, but they are an incredibly efficient and economical addition to any survival ‘battery’. So give some thought, and see if you can’t get in touch with your inner Robin Hood… 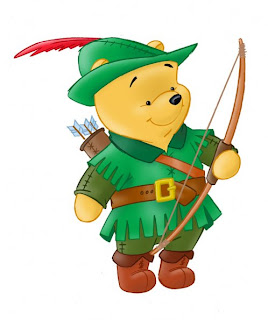 Posted by Bax on 12/24/2010 10:07:00 AM
Email ThisBlogThis!Share to TwitterShare to FacebookShare to Pinterest
Labels: Firearms