A Woman's Perspective on Personal Self Defense, by Roxanne L. Griswold 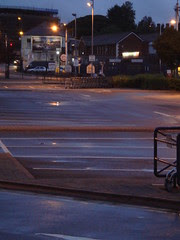 Image by gajbireland via Flickr
from SurvivalBlog.com by James Wesley, Rawles

1 person liked this
Imagine this frightening scenario and try to envision yourself here: You’re strolling through an empty parking lot at dusk thinking about the events of the day when suddenly your arm is clasped from behind and pulled forcefully downward. Your head crashes against the unforgiving concrete. Blood gushes from your nose. Before you have a moment to process anything, your attacker is now on top of you, beating your face with open fists. Gasping for air from fear and excruciating pain, you scream and slap him in an aimless attempt to shield yourself, by which time he has secured your flailing arms. His eyes are dark and empty. He barks out orders that your mind fails to decipher, while pressing the icy blade of a knife against your throat. Your shrieks of panic echo through the air, but no one seems to hear. Subdued under the weight of his body, you have nowhere else to turn. You are the next victim.

Posted by Bax on 10/10/2010 11:32:00 AM
Email ThisBlogThis!Share to TwitterShare to FacebookShare to Pinterest
Labels: Self Defense