Using an Impending Crisis to Raise the Issue of Preparedness, by S.V. 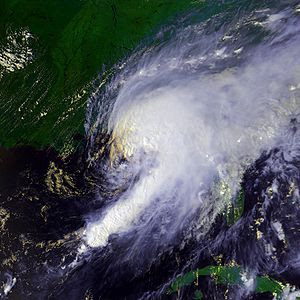 Image via Wikipedia
from SurvivalBlog.com by James Wesley, Rawles
How do you bring up the issue of preparedness, and its urgency? Some people won’t listen, regardless of how you approach them. They will continue to put their faith in the government and society, convinced that what you do is paranoid, suspicious, and unnecessary. However, if they are family, and truly loved, I believe that it is necessary that we don’t give up.
My brother, God bless him, is an intelligent man. He is pursuing his masters at a university located around the Washington D.C. area so that he can go to work for the Federal Government. He puts his faith in the government, convinced that it can never fail, and that while it makes mistakes, it will eventually do the right thing and will get better.
I have tried, on numerous occasions, to approach him about the need to be prepared. Each time, he has ignored me or changed the subject. My problem is that he is family, and so I have to keep reaching out to him, regardless of his attitude. In my opinion, it’s not an option.
I have been racking my brain on how to approach him, again, and have it stick. I’m not looking for him to buy into the eventual TEOTWAWKI, just to get him to start thinking about being prepared. When I heard about Hurricane Earl, I thanked God for another opportunity to bring up the situation to him. I know it sounds strange that I would thank God for a hurricane, but as I’m writing this, there’s no certainty that Earl will hit the D.C. area or the Eastern Seaboard – and I fervently hope that it doesn’t.
I sat down and sent the following e-mail to my brother this morning. (Note: Some items have been changed to protect his privacy and mine. I have included my thoughts and reasons on why I phrased things the way that I did in italics:


Hey Bro,
I know that you're busy with the start of class and all, but with Hurricane Earl having the possibility of hitting or grazing the D.C. area, I figured that it wouldn't hurt if I sent you a quick e-mail with some things you need to think about now.
I know he hasn’t been following Earl at all. We talked last night for two hours, and he never brought it up once. His text back to me basically said he wasn’t even paying attention.
I've been reading up on what happened at Katrina and some other hurricanes, and how the Floridians prepare for these sorts of events, so hopefully that knowledge can be of some use to you.
He really doesn’t know that I prep, and I’m not going to tell him about my preparations until he’s fully accepted the idea that being prepared is just plain smart, and he’s actually taken some concrete steps to be prepared himself. So, I need to “explain” how I know this stuff.
The first thing I want to tell you is that you need to have a plan in place, if you don't already. Remember that no plan survives its first contact with reality, so be flexible. However, I can't overstate the importance of having your plans thought out before you go to bed tonight. You need to decide if you're going to stay in place or evacuate. If you're going to evacuate, you need to make sure that you have all routes out of town mapped out, including major freeways and back roads, as well as fill your cars up now, and don't let them run below 3/4 tank until after the storm has passed. Also, pull out cash from the ATM now, and take more than you think you'll need. ATMs run out of money very quickly once a crisis becomes apparent, and they don't work at all when the power is out.
Remember that if the order to evacuate comes, or once it becomes apparent that Earl will hit the DC area, it will be too late unless you're already prepared to go. You won't have time to wait in line for gas, or pick up money from the ATM - you'll need to bug out as soon as you start feeling "weird" about the situation. Trust your gut.
He has no plan. He hasn’t even thought about having a plan. He doesn’t know where to start, so I have to give him a starting point. A basic evacuation plan, along with making his cars are full of gas, is something simple that can really help him. He’s in class, so if I ask him to go drive all the evacuation routes, he’ll just ignore that piece of advice, and it may cause him to ignore the letter. Baby steps. Crawl before you walk.


I know that this will not cover everything that he needs. I know that there are many more subjects that I would need to cover for him to deal with any of the possible scenarios that could arise if Earl strikes DC. However, this is simply for him to think about and to put in place some basic precautions.
Immediately after I sent him this e-mail, I texted him to read it when he got the chance. After about 10 minutes, he sent me a bunch of questions, which shows to me that he’s taking this seriously. He promised me that he would go get supplies this evening, as well getting his plan together.
His immediate plan is to shelter in place. He thinks he’ll be safe in his building – a high rise that was built 3 years ago. His building also has a fairly large amount of military personnel living there as well, so it may be secure if SHTF.
I pray that he follows through, and actually does prepare for this. Since I’m on the other side of the US, there’s really no way to know for sure; but it sounds like he’s serious. This potential emergency may have been what he needed to open his eyes.
Sometimes, we have to make use of an impeding emergency to impress the importance of preparing on those who are closest to us who haven’t listened so far. - S.V.

Posted by Bax on 10/11/2010 12:36:00 PM
Email ThisBlogThis!Share to TwitterShare to FacebookShare to Pinterest
Labels: General