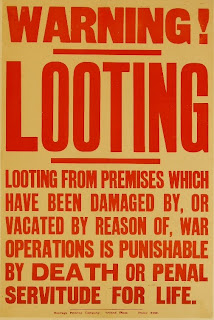 When should you loot? Or more palatably, when should you salvage? It’s a little discussed topic in the preparedness world, though almost all of us think about it. Most of the talk and too much of the thought is confined to shooting down the theoretical Rawlesian Golden Horde as they try to seize supplies from those that have prepared for whatever disaster occurs. That said we all realize that at some point we may find ourselves in an extreme situation, and in the case of a big enough crisis, taking goods that are not legally ours may need to be considered. We might well be part of that horde.

The fact is that in a sustained crisis, where the flow of food and manufactured goods might be interrupted for many months or years rather than days, weeks or a few months, you’re going to run out of something you desperately need. The methods you have to obtain that something are these: make, grow, trade…or loot/salvage.

The problem is that you can’t make some things, such as AA batteries. I very much doubt that there will be any for sale or trade either after a few months. So is it okay to loot the AA batteries out of the smoke detectors in an abandoned office building? Is it dependent on whether you want to keep your cool little flashlight working or if that is what you must have to keep your Steripen functioning to supply safe water for your kids?

Then there are things you can’t grow here in Manitoba. Citrus fruits are a good example. If you’re out of Vitamin C and scurvy is rearing it’s ugly head, is it OK to smash the vending machine in the employee’s lounge in that same office building to get at a few cans of 5-Alive or V8?

One can always hope to trade for what you need. I believe that ad hoc marketplaces will spring up pretty quickly, in fact. The trouble is that these will likely deal in goods that are relatively plentiful, otherwise there would be no surplus to trade. The likelihood of finding Amoxicillin, decent painkillers or ammunition will be pretty slim after a while. Since these sorts of high tech goods cannot be made or grown either, you are left with a choice: Do without or loot (or salvage if you prefer).

Sooner or later, unless you and yours are sitting on an honest-to-god mountain of supplies, you will likely face this choice. What you decide is up to you. For myself, I’ll loot if I absolutely must. It’s not a decision I’ve made easily or lightly. My fervent hope is that I have prepared well enough or that the duration of any crisis is short enough that I will not be forced into it.

The reality is that if a crisis is deep enough or long enough, sooner or later I’ll likely be searching abandoned homes for a few Tylenol or a forgotten can of beans. I’ll eventually find myself in that abandoned gas station looking for a patch kit for a tire, or a battery with a charge left in it. I don’t like to think of myself scavenging on the remnants, but I’ll do it if I have to keep myself and my family going. And you need to decide now whether you will or will not scavenge before you have a need to do it.

If you’ve decide to scavenge rather than, to quote Heinlein: “starve like a gentleman”, you need to think about when it is ‘right’ to do so, and what the parameters are going to be. Is it OK to root through the neighbour’s house after they’ve piled everything they can into the car and headed for the hills? How about the batteries and V8 mentioned earlier? Are the abandoned public buildings or businesses in the pool of potential sites? What about gas and batteries in abandoned vehicles and the contents therein? Will you go so far as to loot corpses?

How long will you wait to begin searching? Leave it too late, you may find nothing left. Start too early, the remnants of the civil powers will most likely execute you on the spot. And in between, you’ll be competing with others every bit as desperate as you are for the ever diminishing amount of resources.

It’s not a comfortable subject, but it’s one you need to think about now, not later. Figure out now what level you’re willing to go to for survival. Better yet, use the idea of having to do this to think about exactly what ‘must have’ would send you out into the streets. Is it little Suzy’s asthma medications? Vitamins to fend off deficiency diseases like scurvy? Or something else entirely? Double or triple stock them from your current levels!

If that isn’t possible, consider stocking something as a barter item. Booze and tobacco are likely safest and easiest, but if you have the ability to stockpile something that others likely cannot, consider doing so as a trade good, even if you feel it is unnecessary for you or your group. It’s not a sure thing, but having something to trade might get you the last of what it is you need.

There’s no foolproof way to avoid what I’ve described, but thorough prepping now will reduce the need to do so later if the situation arises.

Posted by Bax on 10/15/2010 11:06:00 AM
Email ThisBlogThis!Share to TwitterShare to FacebookShare to Pinterest
Labels: General