from Degringolade by Degringolade
One of the things that folks here in tin-foil-hat land are always talking about is there bug out bag.  Much time and much effort are placed into the planning and execution of these little critters.  While many have intrigued me, my favorite has been over at Survival Chick.

I can't really say as I have a bug out bag per se.  I am hard pressed to figure out a situation where a sixty year old man will need to instantly grab a bag and run away from the mutant zombie hordes.  The only thing that a bug out bag offers you is a means of having everything in one place so that you don't have to think in the case of an emergency, you can just get going.

Bugging out is something that you have to think about.  Plans must be laid for the contingencies that exist to the current situation.  Truth be told, it damn well better be your last resort, to be undertaken with great trepidation and even greater certainty of failure. 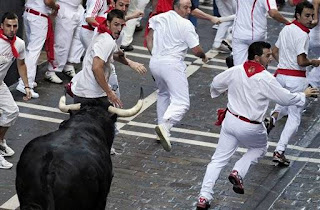 I look at bugging out as a bow to a catastrophic failure at multiple levels.  Kinda like the stupid "crash positions" found in the safety pamphlets in planes.  If something happens like a stuck landing wheel, it might do you some good, but if the plane augers it in, it is a waste.  Making big plans and obsessing about low-probability events is a good way to allow natural selection into your life.

I have always counselled the need for multiple back-ups and flexibility.  A plan usually doesn't survive unless it resides within a specific set of conditions.  Change those conditions and your plan becomes a useless affectation.  It is much more important to be able to react effectively to unknown conditions.  That is a trait of the mind, not a piece of macho stuck over there in corner, gathering dust.

But to be truthful, I am spending this morning updating mine.

Posted by Bax on 9/18/2010 06:15:00 PM
Email ThisBlogThis!Share to TwitterShare to FacebookShare to Pinterest
Labels: Bugging in/out